Over the past several years we have been working to introduce Junior Bible Quiz to South Africa. Everyone loves it once they hear about it and agree it is an awesome program.

After many years of provincial quizzing we have started having national competitions. At the very end of 2011 we hosted the 2nd Annual National Junior Bible Quiz Day for the International Assemblies of God.

Two provinces brought a total of 5 first year teams and 3 experienced teams. We had a great day of quizzing and presenting awards. Enjoy these pictures of our great day.

Please pray with us that other districts will get involved and more children will be challenged to memorize God's word through this program. 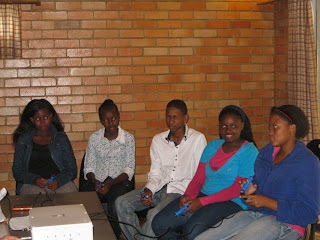 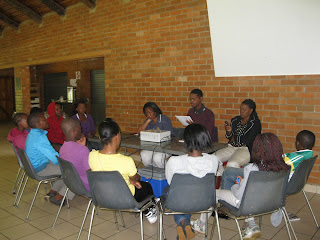 A Fun Day Out

﻿ ﻿Here in South Africa we are nearing not only the end of the year on the calendar but also the end of the school year. The older children are spending every spare minute studying for their final exams and the younger children are getting very excited about moving to the next grade level. ﻿﻿ ﻿﻿

For many of our churches this is the time for end of the year parties and celebrations. This past weekend we were able to participate in one of these celebrations. Bethel Temple IAG in Tlhabane in the Northwest District had over 30 children come to their celebration. They enjoyed all kinds of games and water fun as well as a service.﻿
﻿﻿
Thank you for praying for us and making it possible for us to live here and have these opportunities. Enjoy the pictures
﻿﻿﻿﻿﻿ ﻿﻿﻿﻿﻿﻿﻿﻿
﻿﻿
﻿﻿﻿ ﻿

For many years we have dreamed about creating Sunday school curriculum for South Africa. Other companies try to repackage curriculum from the USA or Australia but it isn’t always a good fit. It’s like wearing someone else’s shoes. We have been dreaming of plans and possibilities but realized that to truly write something that fit South Africa we needed South Africans. 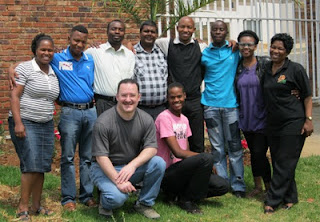 Each year our national IAG children’s ministries department gathers all our district CM directors for a time of reporting and planning. We planned to use this time to enlist the help of those we know are passionate about children and understand how to teach them. We presented them with our dream of creating curriculum for South Africa written by South Africans. They loved the idea and we immediately went to work. 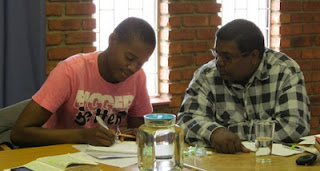 The group spent the entire Saturday organizing how the curriculum should look, deciding what should be taught and discussing how to best implement it for all the various languages and cultures of South Africa. Our task is massive but we have confidence it will be accomplished. We know we serve a God who is able to take our efforts and multiply them into something great. 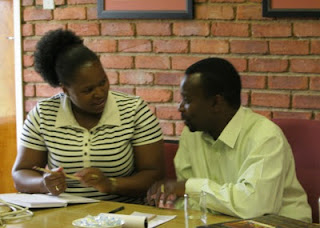 Please pray for this endeavor. The enemy of our souls is already trying hard to stop the work. Pray for wisdom, protection, and creativity as we work. If you want to join us in a bigger way, consider joining us for the first Monday of each month as we fast and pray as a team for the development of this curriculum and the children of South Africa who still need to hear the gospel. 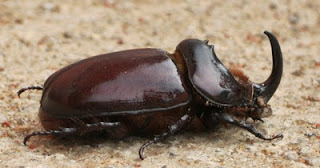 This is just for fun. We found this wonderful little

Rhino Beetle trying to get to his destination on our way to breakfast on Saturday morning.
Posted by Earl & Laura Goodrich 0 comments

Partnering (us, you and God) 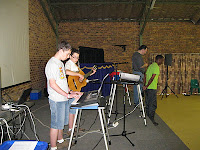 
Much of life is about partnering. We partner with friends to have a fun day. We partner with the one we love for a lifetime of memories and experiences. We may partner with others to conduct business, play games, or complete a project. However, the best partnership we can ever experience is partnering with the Holy Spirit to tell others about Jesus.

This month our family had the joy of partnering with the Holy Spirit and some great Sunday school teachers to bring the joy of Kids Camp to the wonderful children of South Africa. The part we played was primarily in teaching the children through services either in the evenings or mornings. We actually helped with two camps during the first 6 days of October.

The first camp was for the Northwest province of South Africa. At this camp there were about 70 children and 15 teachers. Each morning of camp we held a worship service for the children. Besides learning some really great songs to worship Jesus through, the kids also learned about living a Godly life with the help of the Holy Spirit. At the conclusion of our second service we saw over 30 children baptized in the Holy Spirit. It was an incredible service marked by a strong presence of the Lord that touched us all.

From the 3rd-6th of October we assisted the Gauteng Province with their annual kids camp. We have helped this group of churches host kids camps for 11 years now. Each year is so much fun and exciting and this year was no exception. There are a great team of Sunday school teachers who worked tirelessly (including staying up all night the final night making t-shirts for the kids). The children loved it all – swimming, sports, bounce houses, Bible quiz, crafts and awesome services. Again we saw God move mightily and over 40 children were baptized in the Holy Spirit.

We are so thankful to the Lord for allowing us to be His partner in these endeavors. Truly He was the one working while we were the partners. However, this partnership is not just between us and God. It includes all of you who faithfully and generously support us. Without your continual prayers we would certainly lack the anointing we need to tell children about God’s great love for them. Without your financial support we would not be able to live in South Africa and travel to camps and churches where we do our work. Thank You for Sending Us to South Africa!
Posted by Earl & Laura Goodrich 1 comments 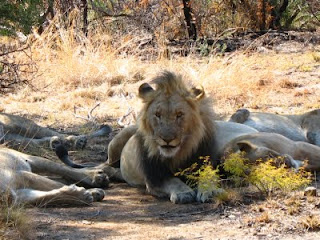 Fear is an interesting phenomenon. I have seen a pride of lions rip apart a wildebeest and I have stood just a few yards away from a hyena. Both experiences were terrifying, yet being so close and so vulnerable to such powerful animals injects an intoxicating brew of chemicals. Yet fear is not always so exhilarating.

Fear’s purpose is to protect from danger, but sometimes the emotions of the moment displaces all fear. While working on a master’s degree, I spent two weeks attending classes in Cape Town, South Africa. One morning I looked out of my dorm window and saw a burglar in the computer lab. All of the students were outraged and about five of us decided to rush down to apprehend the knife-wielding thief. It was only when the adrenaline of the moment dissipated and I was left with the thoughts of what could have gone wrong did I truly feel fear.

Fear can keep us from doing God’s will. I will never forget my first interview in the process to become a missionary. I was asked if I felt ready. My reply was simple, “I’ve never been ready for anything God’s asked me to do.” Those first fifteen months of fund-raising were the hardest and scariest of my life. For this introverted guy, making phone calls and asking for pledges was way outside my comfort zone.

Fund-raising has not gotten any easier. I still dread making phone calls and I sometimes wonder if I can continue in a career that requires such torture every four years. In those moments I recall the words spoken by David Livingstone in one of his last speeches before returning to Africa, “It is emphatically no sacrifice. Say rather it is a privilege. Anxiety, sickness, suffering, or danger, now and then, with a foregoing of the common conveniences and charities of this life, may make us pause, and cause the spirit to waver, and the soul to sink, but let this only be for a moment. All these are nothing when compared with the glory which shall hereafter be revealed in and for us. I never made a sacrifice.”

Livingstone would die in Africa on this last trip. On Livingstone’s tombstone in the Westminster Abbey are the words of John 10:16, “Other sheep I have which are not of this fold; them also I must bring.” In economic recessions it is sometimes necessary to remind ourselves it is not a sacrifice to raise money for missions. It is not a sacrifice to give and send missionaries. It is a privilege.

Thank you to each church and person who has taken up the privilege of spreading the gospel to the children of South Africa. We are targeting early July to depart to South Africa, but we still need about $1700.00 in monthly support. If you have not recently given a cost-of-living increase or do not currently give please consider doing so. I thank you for giving and I thank God for the privilege of going.
Posted by Earl & Laura Goodrich 0 comments

Two Battles
Many Americans would admit to having little knowledge of African history, geography or politics. South Africa might be the exception, however. The struggle against apartheid thrust South Africa onto the international stage.

Good Intentions
The Zionist Churches have their origins with Alexander Dowie’s Christian Catholic Apostolic Church (CCAC) based out of Zion, IL. The movement sent missionaries to South Africa around the turn of the 20th century.

Preaching a message heavy in faith healing, these missionaries saw many great things happen and soon gained a big following. Alexander Dowie died in 1907 and the subsequent divisions meant many CCAC missionaries could not stay or return to South Africa. The churches that remained were left in their infancy to grow on their own. This resulted in a theology mixed with many indigenous beliefs such as ancestor worship.

This one-third is one of the great unreached people groups of South Africa. This one-third remains a potent reminder of the necessity of long-term, dedicated missionaries. Thank You for your years of support. Please pray that we will be able to raise our budget and return to South Africa so we can continue to share the full gospel among this great unreached people group.
Posted by Earl & Laura Goodrich 0 comments

Earl & Laura Goodrich
Pretoria, South Africa
We work with the International Assemblies of God in Pretoria and Johannesburg, South Africa. Our primary focus of ministry is working with Sunday school teachers and pastors to develop strong children’s ministry programs. Our goal is too enable each local church to reach and disciple the children of their communities. We also conduct numerous children’s evangelism events throughout the area in 3-5 day programs at local churches. Our other responsibilities include writing children’s church curriculum, training leaders, and providing administrative assistance to the Bible colleges and the missionary body of South Africa.